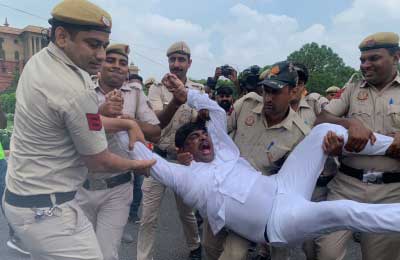 Delhi Police has started detaining Congress MPs who were protesting against the Central government near the Rashtrapati Bhawan.

Earlier, the Congress MPs began their protest march from Parliament house to the Rashtrapati Bhavan in wake of the party’s interim president Sonia Gandhi’s questioning by the Enforcement Directorate (ED), as well as no discussion of important issues in Parliament.

However, as they moved forward to give a memorandum to President Droupadi Murmu, the Delhi Police stopped them midway near Vijay Chowk.

Subsequently, the Congress parliamentarians, including Rahul Gandhi, sat in protest in front of Vijay Chowk.

The protesting Congress leaders, holding placards, were raising slogans against the ED and Central government.

As per latest visuals from the spot, female Congress MPs could be seen being dragged by the police personnel and bundled in a bus.

“What is the problem? We want to go there to meet the President and handover the memorandum. Why are we not allowed?” Rahul Gandhi could be heard while he was talking to a Delhi Police official.