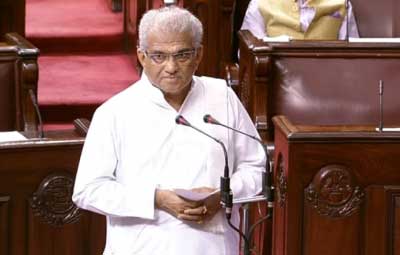 He was nominated to the Upper House by the government on July 6 along with music composer Ilaiyaraaja, athlete P.T. Usha and film director K.V. Vijayendra Prasad.

Heggade has served as the Dharmadhikari of the Dharmasthala Temple in Karnataka since the tender age of 20.

He has been a devoted philanthropist for more than five decades. He has led various transformative initiatives for rural development and promotion of self-employment. He established the Rural Development and Self-Employment Training Institute (RDSETI) to provide awareness about self-employment opportunities and train rural youth.

Currently, the project has more than six lakh SHGs and over 49 lakh members. He also heads the Shri Dharmasthala Manjunatheswara Educational Trust, which provides quality and affordable education through more than 25 schools and colleges.

He was awarded the Padma Vibhushan in 2015.