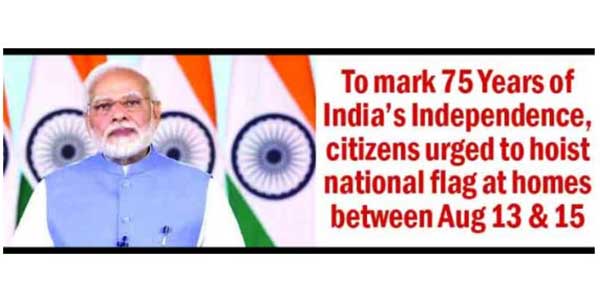 Prime Minister Narendra Modi on Friday appealed to citizens to strengthen the ‘Har Ghar Tiranga’ movement by hoisting or displaying the national flag at homes between August 13 and 15.
In a tweet, Modi said the movement, an initiative of the ministry of culture to mark ‘Azadi ka Amrit Mahotsav’ celebrations for India’s 75th year of Independence, will help “deepen our connect with the national flag”.
“This year, when we are marking Azadi Ka Amrit Mahotsav, let us strengthen the Har Ghar Tiranga Movement. Hoist the Tricolour or display it in your homes between 13th and 15th August. This movement will deepen our connect with the national flag,” he wrote on the micro-blogging site. Modi also noted that it was on July 22, 1947, that the tricolour was adopted as the national flag.
“Today, 22nd July has a special relevance in our history. It was on this day in 1947 that our National Flag was adopted. Sharing some interesting nuggets from history including details of the committee associated with our Tricolour and the first Tricolour unfurled by Pandit Nehru,” he said in a separate tweet, while sharing details of official communications leading to the adoption of the national flag.
Modi also shared a photograph of the first tricolour unfurled by the country’s first prime minister Jawaharlal Nehru.
Union home and cooperation minister Amit Shah also called upon citizens to join the ‘Har Ghar Tiranga’ campaign. “Our national flag not only unites every Indian but also strengthens their spirit of devotion to the nation…,” he tweeted.
Rio appeals citizens
Meanwhile, Nagaland chief minister Neiphiu Rio also appealed to the citizens of the State to hoist the Tricolor at their respective homes from August 13 to 15.
“Nagaland is joining the rest of the country in #HarGharTiranga campaign commemorating #AzadiKaAmritMahotsav,” Rio said in a tweet.