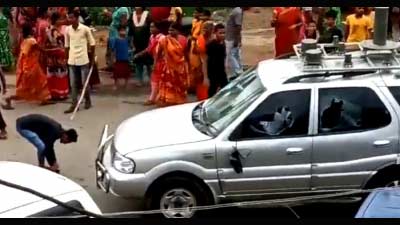 The Patna Police arrested 13 persons in connection with stone pelting on the carcade of Chief Minister Nitish Kumar on Monday.

The police said that 23 more persons were identified and they will be arrested soon.

The stone pelting happened at Sogahi village under Gaurichak police station in Patna. The CM’s carcede was on the way to Gaya on Sunday as Nitish Kumar had a scheduled programme to review the upcoming “Pritripaksha Mela”, which is organised every year and people of the Hindu community from across the world come to Gaya for “Pind Daan”.

CM Nitish Kumar was not present in any of the vehicles. He was scheduled to go to Gaya by helicopter on Monday. The carcade went there a day earlier to provide local transportation for the chief minister.

The villagers of Sogahi were protesting against the murder of a youth, who was missing since August 7. The villagers claimed that four of his friends went to the bank of Ganga River near Gaighat and one of them had been missing since then. The family members of the victim lodged a missing complaint in the Gaurichak police station.

The dead body of the victim was recovered on Sunday. The villagers, after recovering the dead body, put it on the road and protested against the district administration. At the same time, the carcade of Nitish Kumar reached there and an agitated mob pelted stones at them. Some of the vehicles were damaged due to stone pelting.

The Patna SSP Manavjeet Singh Dhillon also asked for a clarification from the SHO of Gauri Chak that why he had not informed senior officers about the agitation. The matter was related to intelligence failure and breach of chief minister’s security.