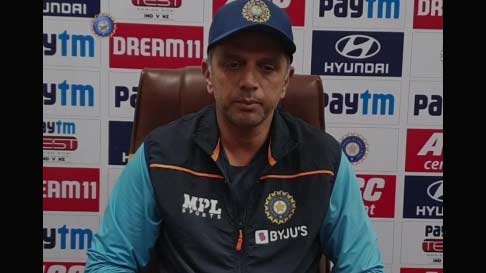 India cricket team head coach Rahul Dravid has tested positive for COVID-19, placing his involvement during the Asia Cup, scheduled to commence in the UAE from August 27, in doubt.

A press statement from the Indian cricket board confirmed the news, stating, “Team India Head Coach Rahul Dravid has tested positive for COVID-19 in a routine test conducted ahead of the team’s departure to the UAE for Asia Cup 2022.

“Mr. Dravid is under the supervision of the BCCI Medical team and has mild symptoms. He will join the team once he returns with a negative COVID-19 report. The rest of the team will assemble in UAE on 23rd August, 2022.”

Dravid was supposed to travel to Dubai on Tuesday (August 23) but his positive test has put his availability for the Asia Cup in jeopardy, at least for the initial stages of the tournament.

In his absence, VVS Laxman, the director of the National Cricket Academy (NCA) could take charge of the Indian team, according to ICC.

This won’t be the first time that Laxman has stood in for Dravid. The former Indian batter took charge of the Indian team during their away T20I assignment in Ireland and was also in charge during the recently concluded ODI series in Zimbabwe, which India won 3-0.

Dravid will take charge of the team once he recovers. The Asia Cup is set to conclude on September 11.

India will open their campaign against Pakistan on August 28 and will play their second match against a Qualifier on August 31.