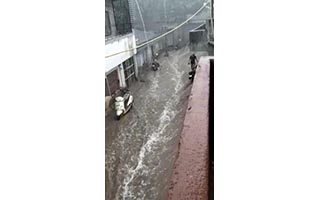 Although the incessant rainfall witnessed across Gujarat in the past one week has receded in many parts of the state and relief work is underway, some districts are still on red alert.

Briefing the media after a review meeting at the State Emergency Operation Centre in Gandhinagar on Wednesday, Revenue and Disaster Management Minister Rajendra Trivedi said that red alert has been issued in Junagadh, Gir Somnath, Dang, Valsad and Navsari districts following forecast of heavy to very heavy rainfall.

The state administration is prepared to ensure the safety and security of human lives and property, he said.

Sharing details of the reservoirs, Trivedi said that 21 reservoirs in the state are more than 100 per cent full as they are filled with rainwater.

Teams of NDRF and SDRF, local police and administration in collaboration with local youth rescued more than 110 civilians and four animals trapped in water in various villages of Bhuj, Nakhtrana, Lakhpat, Abdasa, Mundra and Mandvi talukas in Kutch district, he said.

Trivedi added that so far 83 human deaths have been reported from across the state with the highest number of deaths occuring due to lightning. In the last 24 hours, 14 people have died, he said.

Giving more details, the minister said that so far 31,035 citizens have been relocated to safer places. Of these, 21,094 are still in shelters while 9,848 have returned to their homes after the water level reduced.

He added that out of the 14,610 ST bus routes operating in the villages across the state, only 138 were closed. Similarly, out of the more than 18,000 villages, electricity was disrupted in 769 villages where power supply has been restored.