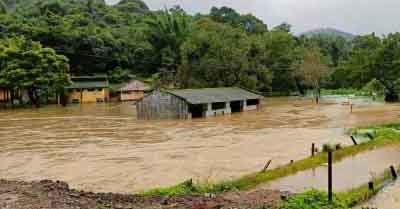 A woman and her daughter were killed in a wall collapse incident in Markawada village of Uttara Kannada district as heavy rain continued to lash Karnataka on Tuesday.

Several incidents of landslides, school building and house collapse were reported from coastal as well as north Karnataka region.

The deceased are identified as 35-year-old Rukmini Vittal and her 13-year-old daughter Sridevi Vittal. The deceased were asleep when the incident took place. Though the neighbours tried to clear the debris, the victims had succumbed.

Meanwhile, the authorities have fished out a youth’s body on Tuesday in Kaniyur near Puttur of Dakshina Kannada district. The search for another body is on. The deceased youth were travelling in a car which was washed away by flood water. The body was found 250 meters away from where the car was recovered.

Following heavy rains, people living on banks of river Krishna in north Karnataka and Cauvery in south Karnataka have been asked to shift to dafer places. Chief Minister Basavaraj Bommai, before leaving for rain-affected regions in the state, took stock of the situation from Home Minister Araga Jnanendra, Minister for Revenue R. Ashok and Minister for Energy V. Sunil Kumar.

After arriving in Mysuru, speaking to reporters Chief Minister Bommai stated: “We have inputs on loss of life, incidents of house collapse. The survey of loss to agriculture is being conducted.”

“Importantly there is road connectivity loss due to heavy rains. There are landslides, Kodagu district has experienced earthquakes, and there is sea erosion. In north Karnataka, houses on river banks are damaged. First phase crop loss survey has been done in the state and I will get details in the evening,” he said.

CM Bommai maintained that the National Disaster Management Authority has got Rs 739 crore funds to take up rescue and relief operations in the state. There is no dearth of funds for taking up relief work.

There are sensitive seismic zones in Kodagu which experienced tremors recently. It has been happening in the same places. He further maintained that the entire government is engaged in addressing the woes of people in rain-affected regions. “I will issue directions for the district administration. I will stand with people,” he says.