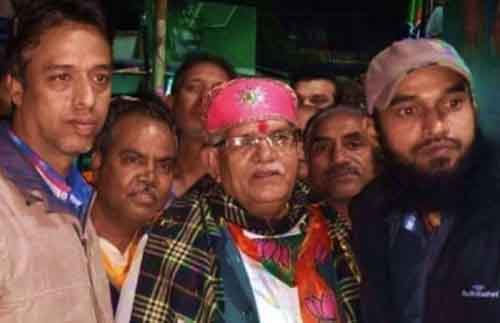 In the letter, he said, “As per media reports, Mohammad Riyaz Attari (one of the prime accused in the Udaipur killing) has been a member of BJP who has been attending different events of the party. He has attended many party events and BJP workers were seen welcoming these leaders. Photos of the perpetrators of this incident with BJP leaders are going viral. Media reports say that he was an active worker of BJP.”

According to the latest news published in the media, a terrorist caught in Jammu was the chief of the BJP’s IT cell. What is their collusion with terrorists, he questioned and urged the agency to probe the matter.

Dotasra also commented on BJP leaders visiting Udaipur after their return from their Hyderabad meeting.

He said, “Bharatiya Janata Party has no concern with the public. There is a blind race going on among them in which they just have to become the chief ministerial candidate, so they have neither any feelings left in them nor do they have any vision for the state. This is the reason why BJP leader is going to Kanhaiya Lal’s house after 7 days of incident enjoying their Hyderabad tour. CM cancelled his Jodhpur tour and reached Udaipur; DG, CS, ACS Home and I myself went to Udaipur with CM Saheb but no BJP leader reached.”

“Gulabchand Kataria is a local MLA and Leader of Opposition, it was his responsibility to stay in Udaipur in such a crisis and help the government in controlling the situation, but he went to Hyderabad the very next day after the June 28 incident,” he commented.

“Now all BJP leaders including Vasundhara Raje, Gajendra Singh Shekhawat are competing to go to Kanhaiya Lal’s house because of politics. The Chief Minister had called an all-party meeting so that the situation could be discussed and peace could be restored in Rajasthan, but neither the Leader of the Opposition, nor the Deputy Leader of the Opposition, nor the BJP State President came to that meeting. Today the people of Rajasthan are compelled to think what good will such irresponsible opposition do to Rajasthan,” Dotasra stated.

“The incident happened on June 28. Rajasthan BJP leaders should tell where they were and why were they missing after this incident when the whole of Rajasthan was in sorrow. Then pictures of them celebrating in five star hotels of Hyderabad were coming out. Now they are going to Udaipur as political tourists and talking nonsense,” he added.