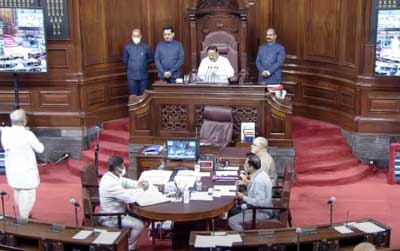 The Rajya Sabha proceedings were adjourned till 12 p.m. on Thursday after the Opposition continued its create an uproar demanding a discussion on the hike in GST rates, inflation and other issues.

Soon after assembling for the day’s proceedings, philanthropist Dr D. Veerendra Heggade took oath as a member of the House. He was nominated to the Upper House by the government on July 6 along with music composer Ilaiyaraaja, athlete P.T. Usha and film director K.V. Vijayendra Prasad.

The Opposition demanded a discussion under Rule 267 by suspending all other business. As his efforts to placate the agitating members went in vain, Chairman M. Venkaiah Naidu adjourned the House till 12 noon.

He also reminded them that no placards and items are allowed inside the House.

The Rajya Sabha has been witnessing protests by the opposition members since the start of the Monsoon Session on Monday.

Opposition benches are demanding a discussion on GST rate hike, Agnipath scheme and other issues.

Naidu, presiding over his last session of his tenure, had said that 57 per cent of the sittings of the House were either fully or partly disrupted during the last 13 sessions of his tenure.