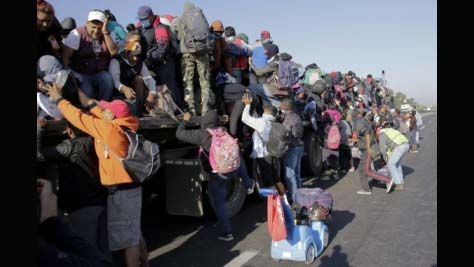 The International Committee of the Red Cross (ICRC) called on regional countries to strengthen cooperation to identify undocumented migrants who died on their journey to the north.

“Every year thousands of people lose their lives on migratory routes as a result of accidents, violence or hostile terrain,” the ICRC delegation for Mexico and Central America tweeted.

The organization said collaboration among origin, transit and destination countries is essential to recovering the remains of migrants, restore their identity and return them to families.

“This includes the exchange, management and analysis of information for identification,” it added.

There are efforts to uncover the magnitude of the tragedy, and the already-known figures represent only a minimum number, the ICRC said.

Mexico and the US are transit and destination countries for a large number of migrants, many of whom disappear each year and die without being identified.

In June, 53 migrants were found dead inside an abandoned 18-wheeler in San Antonio, a major city in Texas, becoming one of the deadliest migrant-smuggling operations in recent US history.