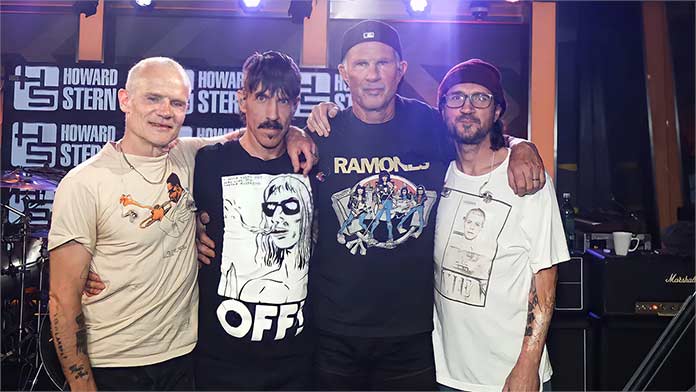 Red Hot Chili Peppers are the 2022 recipient of the Global Icon Award at the MTV Video Music Awards (VMAs).
Anthony Kiedis and co will take to the stage to perform and collect the prestigious accolade at the star-studded ceremony at the Prudential Center in Newark, New Jersey on August 28.
The ‘By The Way’ rockers – completed by Chad Smith, John Frusciante, and Flea – previously accepted the Michael Jackson Video Vanguard Award at the 2000 awards, where they performed ‘Californication’.
The latter honour will go to rap megastar Nicki Minaj this year, who said: “I’m receiving the Video Vanguard Award at the 2022 #VMAs! You DO NOT !!!! I REPEAT!!!! You do NOTTTTTT want to miss my performance – Sunday August 28 at 8p on @MTV.”
Along with securing the gong, the ‘Super Freaky Girl’ star will take to the stage along with the likes of Anitta, J Balvin, Marshmello x Khalid and Panic! At The Disco, Maneskin and Jack Harlow. Bruce Gillmer, Paramount’s president of music, music talent, programming and events and Music for Paramount COO said: “Nicki has broken barriers for women in hip-hop with her versatility and creative artistry. She has shifted the music industry and cemented her status as a global superstar with her crossover appeal, genre-defying style and continuing to be unapologetically ‘Nicki.’”
Elsewhere, Harry Styles has earned six nominations.
The ‘As It Was’ hitmaker is up for several gongs at the ceremony including Artist of the Year and Best Video for his aforementioned hit.
Doja Cat is also up for six awards but Lil Nas X, Jack Harlow and Kendrick Lamar lead the field with seven nominations.
Drake, Ed Sheeran, Billie Eilish, Dua Lipa, Taylor Swift and The Weeknd are all up for five prizes each.
Meanwhile, Madonna has made history by becoming the only artist to be nominated in every decade since the VMAs were first held in 1984.
The Queen of Pop is the most awarded artist in VMAs history and ‘Madame X’ has provided her with a 69th career nomination. There are 26 first-time nominees this year including Kacey Musgraves and Maneskin.
This year’s VMAs will air from 8pm on MTV, the CW, BET, BET Her, CMT, Comedy Central, Logo, MTV2, Nickelodeon, Paramount Network, Pop, TVLand, and VH1.