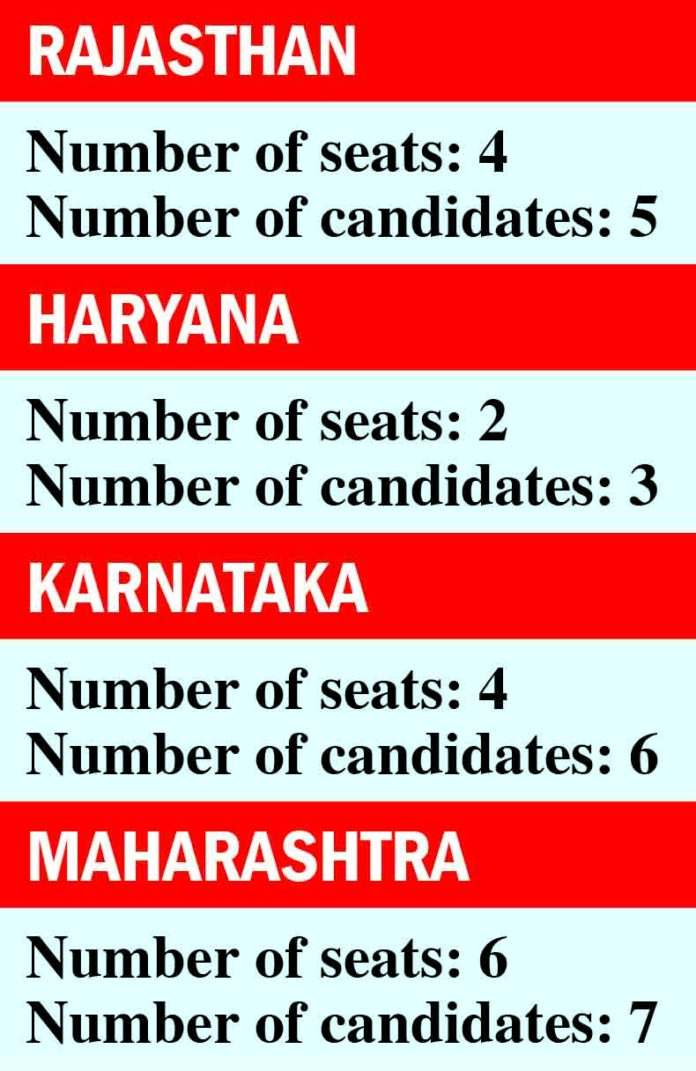 Stakes are high for the 16 Rajya Sabha seats across four states, voting for which will be conducted on Friday. The outcome will determine the balance in the upper House of Parliament, where the ruling NDA does not command a majority, unlike in the Lok Sabha.
Of the 57 Rajya Sabha seats that fell vacant, 41 candidates in Uttar Pradesh, Tamil Nadu, Bihar, Andhra Pradesh, Madhya Pradesh, Odisha, Chhattisgarh, Punjab, Telangana, Jharkhand and Uttarakhand were declared elected unopposed last Friday.
However, elections will be held for 16 seats of Haryana, Rajasthan, Maharashtra and Karnataka on Friday as the number of candidates exceeds the seats going to the polls. An exciting day could be in store, as parties, wary of poaching and cross voting, are leaving nothing to chances.
Rajasthan: Congress has fielded Mukul Wasnik, Pramod Tiwari and Randeep Surjewala for the polls from Rajasthan, while the BJP has chosen as its official candidate former minister Ghanshyam Tiwari.
The Congress and the BJP are set to comfortably win two and one seats, respectively. But Media baron Subhash Chandra has made the contest interesting by entering the fray as a BJP-backed independent candidate.
Congress accused the BJP of horse-trading attempts and had shifted its MLAs to a resort in Udaipur on June 2. The BJP also shifted its MLAs to a hotel on the outskirts of Jaipur on June 6 for a “training camp”. Amid allegations of horse trading, Subhash Chandra has increased worries of the ruling party by claiming that eight MLAs will cross vote in his favour to hand him a victory.
The Congress currently has 108 legislators in the 200-member state assembly and needs 123 votes to win three seats. The Bharatiya Tribal Party (BTP) with two MLAs has extended support to it. The Congress is also claiming the support of 13 Independents and one Rashtriya Lok Dal MLA, who is currently a state minister.
On the other hand, the BJP has 71 MLAs. After the victory of its party candidate, BJP will be left with 30 surplus votes, which will go to Subhash Chandra. Three MLAs of the Rashtriya Loktantrik Party (RLP) too have extended support to Chandra, who needs eight more seats to win the elections.
Maharashtra: In a setback to chief minister Uddhav Thackeray and the MVA alliance, a special court in Mumbai rejected the pleas of Maharashtra minister Nawab Malik and former minister Anil Deshmukh seeking a day’s bail to vote in Friday’s Rajya Sabha elections. Both have now moved Bombay HC, and a hearing is scheduled for Friday morning.
There are seven candidates in the fray for the six seats, that makes the contest interesting and every vote crucial.
Union minister Piyush Goyal, Anil Bonde, Dhananjay Mahadik (BJP), Praful Patel (NCP), Sanjay Raut and Sanjay Pawar (Shiv Sena) and Imran Pratapgarhi (Congress) are in fray for the six seats. The contest is for the sixth seat- between Mahadik and Pawar- for which both MVA parties and BJP are banking on the 25 additional votes of smaller parties and independents.
Haryana: The Haryana Congress MLAs have left for a resort in Chattisgarh’s Raipur and are expected to reach Chandigarh just hours before the polling for the Rajya Sabha elections begins on Friday, sources said.
Meanwhile, the ruling BJP-JJP MLAs remain lodged at a resort in Chandigarh for the second day as the contest for one of the two seats going to the polls sharpened. The BJP has fielded former Minister Krishan Lal Panwar while Ajay Maken is the Congress nominee.
While the BJP has sufficient votes to win one seat, the contest has spiced up for the second seat with entry of media baron Kartikeya Sharma, an Independent candidate who is backed by the BJP-JJP combine. He is also supported by Independents and Gopal Kanda, lone MLA of the Haryana Lokhit Party.
Karnataka: Six candidates are in the fray in the Rajya Sabha elections for four seats from Karnataka, necessitating a tight contest for the fourth seat.
Despite not having the adequate number of votes to win the fourth seat from the state assembly, all the three major parties- BJP, Congress and JD(S)- have fielded candidates for the seat, forcing an election.
The candidates in the fray are- Nirmala Sitharaman, actor-politician Jaggesh and outgoing MLC Lehar Singh Siroya from the BJP, former Union minister Jairam Ramesh and state general secretary Mansoor Ali Khan from the Congress, and former MP D Kupendra Reddy from the JD(S).
Official sources said a situation may arise where the second and third preferential votes may have to be counted if necessary.
There is also a view that the BJP may be at an advantage if preferential votes were to be counted and the Congress and JD(S) don’t come to any understanding or if there is no cross-voting.