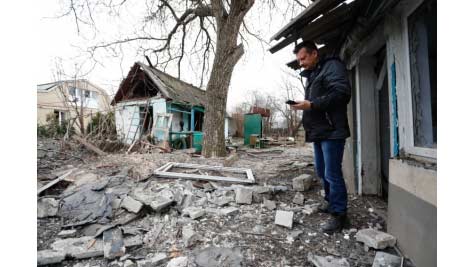 Russian forces have launched a major offensive in the Donetsk region of eastern Ukraine, the General Staff in Kiev said in a statement on Friday.

“The enemy is conducting an offensive operation in the direction of Bakhmut and Avdiivka in the Donetsk area,” dpa news agency quoted the statement as saying

The push was aimed at positioning Russian forces for an assault on Soledar and Bakhmut and expanding Russian control to the west of the city of Donetsk, it added.

Soledar and Bakhmut form part of the defensive line to the east of the conurbations of the major cities of Sloviansk and Kramatorsk, which were home to more than half a million people before the war.

The region is the last still under the control of Ukrainian government forces in the wider eastern Donbas region and has been heavily fortified by the Ukrainian side.

The General Staff’s statement also said the Russian assault near Bakhmut had been without success, while fighting was continuing on the approaches to Avdiivka, directly to the north of Donetsk city.

It could not be independently confirmed but was in line with earlier reports of increased fighting in the region following a brief pause.

Russian Defence Ministry spokesperson Igor Konashenkov had said earlier that due to heavy losses, several Ukrainian brigades have withdrawn from their positions near Soledar, Avdiivka and Bakhmut.