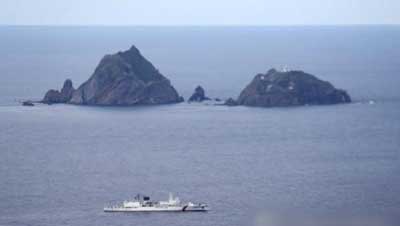 The South Korean government has condemned Japan on Friday for laying repeated claim to the easternmost islets of Dokdo in its annual defence white paper.

“(The government) strongly protests against Japan’s repetition of its sovereignty claim over Dokdo, clearly an integral part of the Korean territory in terms of history, geography and international law, and urges it to immediately scrap it,” Foreign Ministry spokesperson Choi Young-sam said in a statement.

Such a move is of no help to efforts for building “future-oriented” bilateral relations, he added.

It was issued shortly after Japanese Defence Minister Nobuo Kishi reported this year’s document to the Cabinet, presided over by Prime Minister Fumio Kishida in Tokyo. It marked the 18th consecutive year for Tokyo to claim its sovereignty over Dokdo in the paper on the nation’s security conditions and its responses.

In separate protest, Seoul’s Defence Ministry called in Takao Nakashima, a defence attache at the embassy.

The paper was published just days after Foreign Minister Park Jin visited Tokyo for talks with his local counterpart, demonstrating President Yoon Suk-yeol’s commitment to a resolution to disputes over shared history, especially Japan’s colonisation of Korea from 1910-45.

The updated version carried largely similar descriptions on the territorial issue, a longtime sticking point in Seoul-Tokyo relations, with those of last year’s one.

But it added a position that cooperation between the neighbouring countries is getting more important amid grave regional security situations.

Seoul has maintained its effective control of Dokdo with a small police detachment on the rocky islets in the East Sea.