SAFF U-20 Championship: We cannot get complacent, says coach Venkatesh ahead of Maldives clash 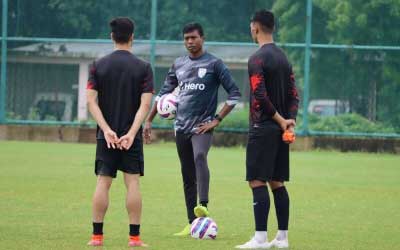 India U-20 national football team head coach Shanmugam Venkatesh chose to remain grounded despite a comprehensive victory against Nepal, as the team prepare to take on the Maldives in the SAFF U-20 Championship.

Having earned an 8-0 victory against Nepal, India all but need to ensure a win against the Maldives to secure their berth in the Final.

“If we win our last game, we’re through, and that’s the most important thing,” said Venkatesh on the eve of the Maldives clash. “Having said that, we can’t take Maldives for granted. We have to respect them.”

“It’s just the beginning for us. As coach said, it was just our second win. We will have to move on and focus on our next one now,” said Halen.

Venkatesh, in fact, has warned his boys against complacency after the big win against Nepal.

“It was a very nice result for us in the last game, but I’ve told the boys to focus on the next game. It’s just the second win of the tournament for us, afterall. We have to get three more points,” he stated.

The Blue Colts started off their campaign in the SAF U-20 Championship with a 1-2 defeat against Bangladesh, but have picked up the pace since then, having scored 12 goals in he next two games, while conceding none. Helen attributed the newfound defensive organisation to the team’s mental strength and the ability to take positive learnings from mistakes.

“We made a few mistakes in our first game, but the important thing is that we’ve learnt from them. All the boys have shown great character to accept what they’ve done wrong and improve on that,” he said. ” We got together as a team and figured out how we can combine to produce the best results.”

India’s match against the Maldives kicks off on Tuesday at the Kalinga Stadium in Bhubaneswar and will be streamed live on Sportzworkz YouTube channel, and the Eleven Sports platforms.