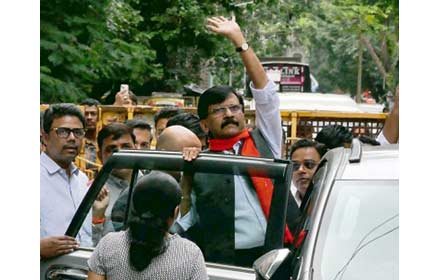 The ED said that the summons were issued after transactions done on Varsha Raut’s account came to light.

Sanjay Raut was on Sunday arrested by the ED after he skipped several summons. He was sent to the ED’s custody till Thursday. Now his custodial remand has been extended till Monday by the Mumbai court.

The ED had earlier questioned Pune businessman Avinash Bhosale in custody in the DHFL Yes Bank case, and sources claimed that they wanted to grill Raut in this matter too.

The sources claimed that the Patra Chawl case of the ED is also linked to the DHFL case.

In April, the ED had attached Raut’s property in connection with the land scam.

A property worth Rs 9 crore of Raut’s associate Pravin Raut and assets worth Rs 2 crore belonging to Varsha Raut, the wife of Sanjay Raut, were attached by the ED.

Pravin had eight parcels of land in Alibaug and a flat registered in the name of Varsha Raut which were attached. The ED had arrested Pravin in connection with the matter.

“We had filed a chargesheet in the matter against Pravin, Sarang Wadhawan and Rakesh Wadhawan of HDIL and Guru Ashish Construction and others were named as an accused in the chargesheet,” said an ED official.

The ED came to know during the probe that Pravin allegedly paid Rs 55 lakh to Varsha. This was paid from the bank account of Pravin’s wife.

The money was termed as proceeds of crime by the ED.

It was also alleged that the travel expenses of Sanjay Raut were borne by Pravin which included his hotel stay and air tickets.