Sergei Lavrov: No offer of talks from US on nuclear arms control treaty 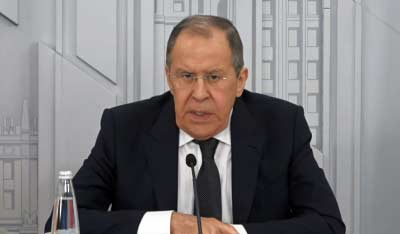 The US has not yet offered any new talks on nuclear arms control, according to Russian Foreign Minister Sergei Lavrov.

“They have not even proposed to resume these talks,” Lavrov said on Wednesday during a visit to Myanmar, according to Russian state news agency TASS.

At issue is a replacement for the New START disarmament treaty, the only remaining major arms control agreement between the US and Russia. The treaty limits the nuclear arsenals of both countries to 800 delivery systems and 1,550 operational warheads each, dpa news agency reported.

In February 2021, US President Joe Biden and Russian President Vladimir Putin had agreed on an extension of New START.

Earlier in the week a month-long UN conference to review the Treaty on the Non-Proliferation of Nuclear Weapons (NPT) got under way.

Biden said at the UN conference that his administration was ready to negotiate “expeditiously” on a new arms control framework to replace the New START treaty when it expires in 2026. “But negotiation requires a willing partner operating in good faith,” Biden had stressed.

And Russia’s war on Ukraine represents an attack on the cornerstones of the international order, he added.