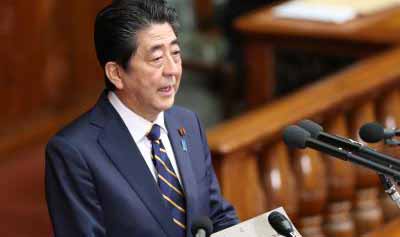 Former Japanese Prime Minister Shinzo Abe passed away on Friday, hours after being shot while addressing an election rally in the city of Nara, according to state media.

According to state broadcaster NHK, the attack took place at around 11.30 a.m. (local time) near the Yamatosaidaiji Station in Nara city while Abe was making a speech during a Liberal Democratic Party candidate’s election campaign.

A doctor attending on Abe at the Nara Medical University Hospital said that the leader died at 08:03 GMT, BBC reported.

Abe suffered cardiopulmonary arrest at the scene of the crime and no vital signs were detected when Abe was rushed to the hospital, the doctor said.

“During the four-and-a-half-hour treatment, medics tried to stop the bleeding and carried out a blood transfusion, using more than 100 units of blood, but he bled to death,” the doctor said.

Abe sustained two wounds, believed to be bullet injuries, but medics could not find bullets during surgery, the doctor added.

Abe, 67, immediately collapsed after being shot and was seen bleeding before he was taken to hospital.

The suspect, identified as 41-year-old Yamagami Tetsuya, a resident of Nara city, has been arrested.

According to the police, the accused told investigators that he was dissatisfied with the former Prime Minister and intended to kill him.

Sources added that the suspect worked for the Maritime Self Defense Force for three years until around 2005.

Investigative sources told NHK a gun seized at the scene appeared to be handmade.

Japan is slated to hold parliamentary election this Sunday.

Abe’s visit was only confirmed late last night, so how the suspect managed to find out about this and carry out the attack remains an open question, said the BBC.

Prime Minister Fumio Kishida said the attack was a “despicable act that took place during an election period, which is the foundation of democracy”, state broadcaster NHK reported.

“It is totally unacceptable. I condemn the act in the strongest possible terms.”

Kishida said he is “lost for words”, describing Abe as a “personal friend”.

Global leaders have expressed shock and grief over Abe’s demise.

Expressing grief, Indian Prime Minister Narendra Modi tweeted, “I am shocked and saddened beyond words at the tragic demise of one of my dearest friends, Shinzo Abe. He was a towering global statesman, an outstanding leader, and a remarkable administrator. He dedicated his life to make Japan and the world a better place.”

Prime Minister Modi also commended Abe for his “immense contribution” to elevating New Delhi and Tokyo relations and remembered his last meeting with the former PM.

“As a mark of our deepest respect for former Prime Minister Abe Shinzo, a one day national mourning shall be observed on 9 July 2022,” Modi wrote in another tweet.

In a telegram of condolence adressed to Abe’s wife Akie Abe and mother Yoko Abe, Russian President Valadimir Putin said, “The hand of a criminal cut short the life of an outstanding statesman who headed the Japanese government for a long time and did a lot to develop good neighborly relations between our countries.”

“We maintained regular contacts with Shinzo, in which his excellent personal and professional qualities were fully demonstrated. The bright memory of this wonderful man will forever remain in the hearts of all who knew him,” The Moscow Timnes quoted Putin as saying.

Taking to twitter, French President Emmanuel Macron tweeted that he was “deeply shocked by the odious attack” on Abe.

Macron paid tribute to Abe as “a great prime minister” and said “France stands at the side of the Japanese people.”

South Korean president Yoon Suk-yeol expressed his condolences to Japan, describing the shooting of Abe as an “unforgiveable act of crime”

Former UK PM Boris Johnson tweeted, “Incredibly sad news about Shinzo Abe. His global leadership through unchartered times will be remembered by many. My thoughts are with his family, friends and the Japanese people. The UK stands with you at this dark and sad time.”

He stepped down in 2020 citing health reasons.

He later revealed that he had suffered a relapse of ulcerative colitis, an intestinal disease, the BBC reported.

He was succeeded by his close party ally Yoshihide Suga, who was later replaced by Fumio Kishida.