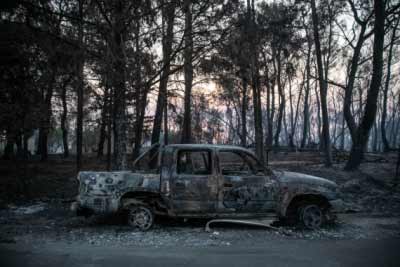 Slovakia, Poland and Italy have offered to send firefighting aircraft to the Czech Republic to help the country to contain a large forest fire in a national park.

Currently, 410 firefighters from 83 units are fighting the fire in the Bohemian Switzerland National Park near the town of Hrensko, the country’s Fire Rescue Service (FRS CR) said on Tuesday. Four helicopters and two airplanes are also helping on site.

“Within the framework of the EU Civil Protection Mechanism, we requested three Canadair aircraft and two helicopters to manage the forest fire in Hrensko. Poland responded with an offer of a helicopter,” the Fire Rescue Service said in a tweet, adding that Slovakia and Italy also responded to “our request for help with aerial firefighting”.

The forest fire, which broke out on Sunday, started spreading on Monday due to windy weather and it even crossed the country’s border with Germany. So far, it has affected an area of nearly 30 hectare in the park, according to local media reports.

Local residents and tourists have been evacuated. No casualties have been reported, Xinhua news agency reported.

Czech Prime Minister Petr Fiala said after he visited the park on Tuesday that the fire was raging in a “difficult-to-access terrain and the use of aerial technology proves to be very effective”.

“We have therefore turned to other countries with a request for firefighting helicopters and aircraft that could be used to manage the fire. I thank Slovakia, Poland and Italy, which have already promised help,” he tweeted.

FRS CR Director General Vladimir Vlcek told the Czech News Agency that he could not predict when the fire would end, which depends on the weather, especially on the strength and direction of the wind.

“It may take several days to completely put out the fire,” he added.

Colony members protest against merger with another colony at Aghunato

Airlines will have to take action against flyers without mask: DGCA