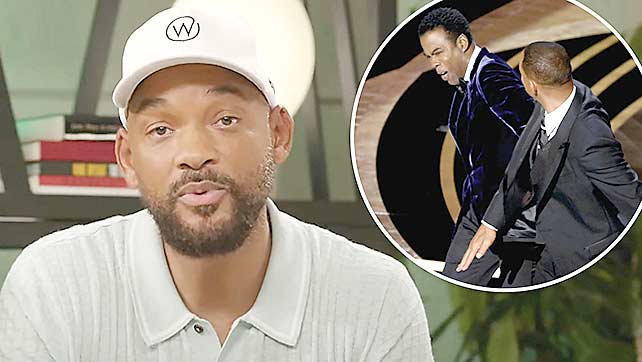 Will Smith has shared an apology video addressing his altercation with Chris Rock at the Oscars 2022.
Four months after Smith slapped the comedian onstage at the Oscars ceremony in March for a joke Rock made about his wife, Jada Pinkett Smith, the actor shared a five-minute video titled ‘It’s Been A Minute…’ to address questions surrounding the incident.
The opening text for the video reads: “Over the last few months, I’ve been doing a lot of thinking and personal work… You asked a lot of fair questions that I wanted to take some time to answer.”
In the video, Smith says: “I’ve reached out to Chris and the message that came back is he’s not ready to talk and when he is, he will reach out.”
He added: “I will say to you, Chris. I apologise to you. My behaviour was unacceptable and I’m here whenever you’re ready to talk.
“I want to apologise to Chris’ mother. I saw an interview that Chris’ mother did, and that was one of the things about that moment… I just didn’t realise, I wasn’t thinking about how many people got hurt in that moment.
“So I want to apologise to Chris’ mother. I want to apologise to Chris’ family, specifically [his brother] Tony Rock. We had a great relationship. Tony Rock was my man. And this is probably irreparable.”
Addressing the question of whether wife Jada asked him to “do something” following the joke, Smith replied: “No. It’s like I made a choice on my own, from my own experiences, from my history with Chris. Jada had nothing to do with it.”
At the end of the video, Smith reiterated his previous apologies following the incident.
“It hurts me emotionally and psychologically to know I didn’t live up to people’s image and impression of me,” Smith said. “The work I’m trying to do is I am deeply remorseful and I’m trying to be remorseful without being ashamed of myself. I am human and I made a mistake. “I’m trying not to think of myself as a piece of shit. So I would say to those people, I know it was confusing, I know it was shocking, but I promise you I am deeply devoted and committed to putting light and love and joy into the world. If you hang on, I promise we’ll be able to be friends again.”
After the altercation and numerous apologies, Smith resigned from the Academy in April this year. He was later banned from all Academy events for 10 years.