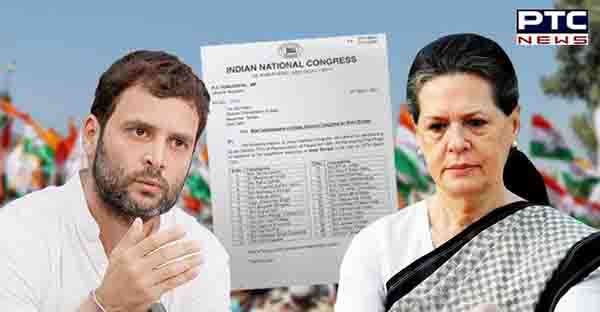 PTI/Correspondent
Congress president Sonia Gandhi, former chief Rahul Gandhi and Jairam Ramesh are among the 30 star campaigners for the Manipur assembly elections, according to the list released by the party on Monday.
The two-phased assembly election in Manipur will be held on February 28 and March 5. Though Sonia Gandhi is also the party’s star campaigner for other states, where polls are being held, neither she nor former prime minister Manmohan Singh have actively campaigned anywhere so far.
The list of star campaigners also include names of former Manipur chief minister O Ibobi Singh, former deputy chief minister Gaikhangam, youth leader Kanhaiya Kumar, party’s minority department chief Imran Pratapgarhi and Mahila Congress chief Metta D’Souza.
Apart from Ramesh, who is overseeing assembly polls in the state, Congress in charge for Manipur Bhakta Charan Das and a host of local leaders are also part of the list. The Congress along with five other ‘like-minded’ parties launched the Manipur Progressive Secular Alliance last week to take on the ruling BJP in the upcoming assembly polls.
Besides the Congress, the other parties in the alliance are CPI, CPM, RSP, JD (S) and Forward Bloc. An 18-point common agenda was also finalised.
96 file nominations for 2nd phase poll
Scrutiny for an Assembly segment was adjourned and nomination paper of a candidate was rejected as nominations filed by candidates contesting in the second phase poll of the Manipur Assembly were taken up for scrutiny on Monday. In the second phase, voting in 22 Assembly segments spread across 10 districts of the state will be held on March 5. A total of 96 candidates filed their nomination papers for the 22 seats. The nomination papers were taken up for scrutiny at the offices of the respective ROs on Monday.
For the Chandel AC, the scrutiny was adjourned after the RO could not settle objections raised over the alleged wrong information provided in the nomination paper of a candidate, reports said. Four candidates interested in contesting the poll from Chandel AC filed their nomination.
The scrutiny of nomination papers for the other 21 Assembly segments was completed and only the nomination paper filed by Haji Asraf Ali as a nominee of Samata Party failed to clear the scrutiny. The last date of withdrawal of nomination for the second phase poll is February 16.

Kamakhya temple buzzes with devotees during Durga Puja after 2 years...