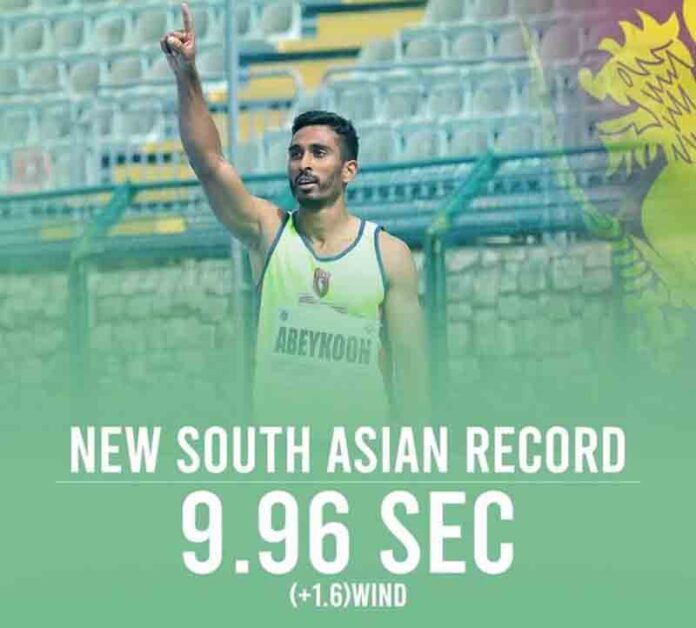 Sri Lankan sprinter Yupun Abeykoon scripted a new record after becoming the first South Asian to run 100m in less than 10 seconds when he competed at the Resisprint International (a World Athletics Continental Tour Challenger meeting) in Switzerland on Sunday.
Abeykoon, who represented Sri Lanka in the 2021 Olympics, finished the 100m race in just 9.96 seconds, Sportstar reported.
He broke his own record of 10.06 seconds which was created earlier this year at the International Athletics meet in Germany.
As a result of Abeykoon’s effort, Sri Lanka became the 167th member of the sub-10 club.
It also made the island nation – the 32nd country with a sub-10 sprinter.
Sri Lankan President Gotabaya Rajapaksa congratulated the athlete.
Former Sri Lanka opener Sanath Jayasuriya extended his wishes on social media and wrote: “Congratulations to young Yupun Abeykoon for establishing a new South Asian record in the 100 meters.”
Elsewhere, Cuba’s Reynier Mena became the first man from his country to break the 20 seconds barrier in 200m sprint and won at the same event in a stunning 19.63 seconds.
25-year-old Mena also broke 10 seconds over 100m for the first time earlier in the afternoon, clocking a PB of 9.99 to finish second to Sri Lanka’s Yupun Abeykoon, who won in a PB of 9.96. Zeze was third in that race in 9.99, also a PB.