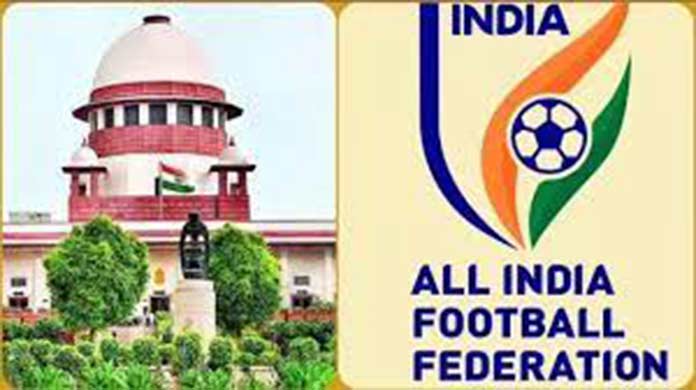 The Supreme Court on Monday disbanded the Committee of Administrators (CoA) it had set up to manage the affairs of the AIFF in a bid to get the suspension of the national football body by the FIFA revoked.
Meeting a key criteria set by the world football governing body FIFA that raised the prospects of the AIFF’s suspension being lifted, the court directed the termination of the mandate of the three-member CoA and handed back the football body’s day-to-day management to its administration to also help salvage the Under-17 Women’s World Cup 2022 due to held in October in India. The CoA headed by former apex court judge Justice (retd) Anil R Dave was appointed on May 18.
The court said it is modifying its earlier orders to “facilitate” the revocation of the suspension and holding of the world tournament in India.
“In the event that the above process is not taken to its logical conclusion, the Court would consider any further order at the subsequent stage,” a bench of Justices DY Chandrachud and AS Bopanna said, a day after the Centre moved an application seeking an end to the “mandate” of the CoA as demanded by the FIFA in a desperate bid to get the All India Football Federation (AIFF)’s suspension lifted.
The top court also postponed the August 28 elections of the AIFF by one week to allow a changed electoral college and the start of the nomination process.
The Centre in its application had virtually accepted all the demands made by the FIFA including ending the tenure of the CoA as well as not allowing individual members in the electoral college. Former chief election commissioner SY Qureshi and former Indian football team captain Bhaskar Ganguly were the other members of the CoA.
The move by the Ministry of Youth Affairs and Sports was also seen as an attempt to ensure that India hosts the FIFA Under-17 Women’s World Cup. The FIFA had on August 15 imposed a ban on the AIFF due to “third party interference” and said the women’s age-group showpiece “cannot currently be held in India as planned”.
“The day-to-day management of AIFF shall be exclusively looked after by the AIFF Administration led by the Acting Secretary General. The mandate of the Committee of Administrators appointed by the order of this Court stands terminated,” the court said.
The Monday order came on a fresh plea filed by the Centre seeking modification of the May 18 and August 3 orders of the court after consultation with the FIFA to ensure revocation of the suspension of the AIFF and the hosting right for holding of the Under-17 Women’s World Cup 2022 in India.
The bench noted that the CoA has already submitted the draft Constitution for the AIFF, together with a tabulated set of suggestions, to this Court on July 15, 2022, and therefore appointed its counsel senior advocate Gopal Sankaranarayanan to assist it as amicus curiae.
Former Indian football team captain Baichung Bhutia and the CoA opposed modification of the court’s orders and said the court should not terminate the reform process. The court should not come under pressure from threats of FIFA as sacrificing the Under-17 Women’s World Cup now would eventually enable the youngsters of the country, in the long run, to look for the main World Cup, they submitted.
The bench said it understands the gravity of the situation but cannot sacrifice the world cup in the larger interest of the country.
“Had it been cricket and a world cup would have been cancelled due to the court order, everyone would have targeted us saying there are people who have done this or that. Here, we understand everything and our only concern is that the scheduled Under-17 Women’s World Cup is held in India”, it said.
Solicitor General Tushar Mehta, appearing for the Centre, said there are two “disastrous consequences” the country is facing, if the orders are not modified — one that India will lose hosting rights of any future football world cup, and second our teams will not be able to play even friendly international matches across the world.
He said that it is not that India is being discriminated against but FIFA follows uniform policy across the world against third-party interference. The bench said bearing in mind the importance of the Under-17 Women’s World Cup 2022 tournament, it is passing the directions on the application. The election programme, which was fixed in pursuance of the order dated August 3, 2022, is permitted to be modified by extending the date of election by one week, it added.
“The voters’ list for the ensuing elections shall consist exclusively of representatives of the Member Associations representing the States/Union Territories (35+1 Associations)”, the bench said and excluded eminent players as directed earlier.
It said the returning officers–Umesh Sinha and Tapas Bhattacharya–shall be deemed to be the returning officers appointed by this court to conduct the elections as there has been no objection to their continuance by any of the contesting parties including the member associations representing the States/Union Territories.
“The Returning Officers shall, within the said period, refix the modalities for the filing of nominations from the stage which was reached on August 13, 2022, and ensure that the elections are completed on schedule”, it said, adding the Executive Committee of AIFF shall consist of 23 persons.
The bench said 17 members (inclusive of the President, a Treasurer, and one Vice President) will be elected by the Electoral College consisting of 35 Associations representing States/Union Territories and six members shall be drawn from eminent players which four men and two women.