Sushmita’s father denies knowledge of her relationship with Lalit Modi 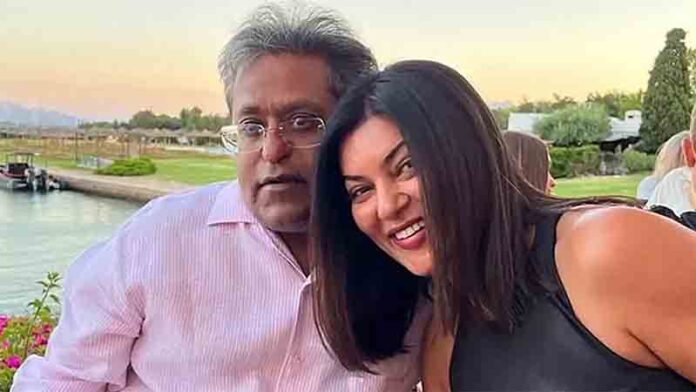 Hours after former IPL Chairman Lalit Modi announced that he is dating Bollywood actress and former Miss Universe Sushmita Sen and intends to tie the knot with her soon, her father and retired Indian Air Force officer Shubeer Sen on Friday said that he has absolutely no knowledge regarding this development.
“I do not have any knowledge or information about this development. I had a telephonic conversation with my daughter on Friday morning only. But she did not tell me anything on this count. I was informed after the tweet from Lalit Modi only by media persons. Since I have absolutely no information on this development, I am unable to offer any comment,” Wing Commander Sen (retd) told a section of the media persons here.
He also said that during the course of conversation with his daughter on Friday morning, there was just casual talk where Lalit Modi was not mentioned even once. “If this happens, it will be an important turn in my daughter’s life. I will surely come to know of that in future. But as of now, I have no knowledge on this count,” he said.
Asked whether he was aware of any kind of growing relationship between his daughter and Lalit Modi, Sen said that she came home to attend a family function almost 18 months back and even then, she did not inform anyone in the family on this count.
Asked specifically, whether Lalit Modi as a son-in-law was acceptable to him, he said that this question would arise only after he is certain whether at all Lalit Modi exists in the matter. “Had I been aware I would have informed the media everything since there is nothing to hide in the matter,” he said.

I’m in a happy place, surrounded by love: Sushmita Sen

Not married and unconditionally surrounded by love, Sushmita Sen said in a cryptic Instagram post on Friday, a day after former Indian Premier League chairperson Lalit Modi set social media abuzz with a tweet on his relationship with the Bollywood star. The “Aarya” star, who did not comment on Thursday night when Lalit Modi made his revelation, took no names in her post in which she shared a photograph with her daughters — Renee and Alisah. The London-based founder of the IPL had referred to Sen as his “better half” and said the relationship marked “a new beginning a new life”. “I’m in a happy place! Not married… no rings… and unconditionally surrounded by love. Enough clarification given… Now back to life and work! Thank you for sharing in my happiness always … And for those who don’t… it’s #NOYB anyway. I love you guys!” Sen, 46, wrote. Following Lalit Modi’s tweet on Thursday, there was speculation about the duo’s marriage, but in a follow up post the 56-year-old businessman clarified that they are just “dating”. (PTI)
“Just for clarity. Not married – just dating each other. That too it will happen one day,” he had said. The businessman had also shared photographs with Sen.

Over 53 lakh flags sold in Assam