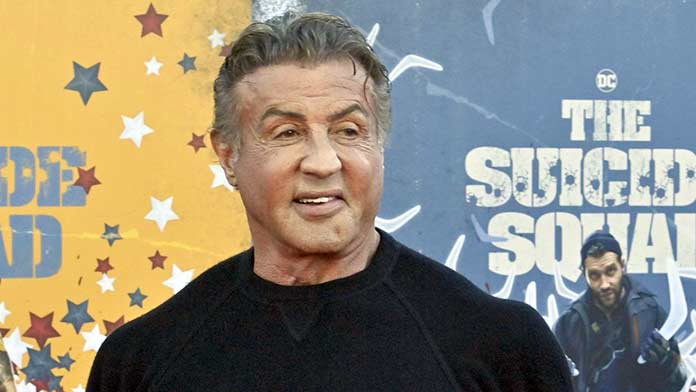 Hollywood star Sylvester Stallone has hidden a tattoo of his wife Jennifer Flavin by covering it up with a picture of Rocky’s dog.
After replacing the design on his right bicep with an inking of Butkus, the bull mastiff belonging to the fictional boxer in the blockbuster franchise, the 76-year-old actor played down speculation there could be marriage troubles, reports aceshowbiz.com.
“Mr. Stallone intended to refresh the tattoo image of his wife Jennifer however the results were unsatisfactory and, unfortunately, unfixable,” a representative for Stallone told MailOnline.
“As a result, he had to cover the original image with a tattoo of his dog from Rocky, Butkus. Mr. Stallone loves his family. The Stallones are presently filming a reality show together which will debut on Paramount+.”
Jennifer also sparked speculation about their marriage as she shared a photo of herself earlier this month hugging their three children.
She captioned the post, “These girls are my priority. Nothing else matters. The 4 of us forever.”
The couple tied the knot in May 1997 at London’s Dorchester Hotel, and Jennifer reflected on her man’s playboy reputation at the time.
She said, “I’m not naive about what may go on when I’m not around — he’s a 45-year-old man — I can’t change the way he is. Still, he’s not a cheating dog every day of the week. We spend five out of seven nights together, so I don’t know where he’d find the time.”
Earlier this year, the pair marked their 25th wedding anniversary, and Sly hailed his wife as an “incredible selfless” woman.
He said at the time, “Happy 25th anniversary to my amazing wife. There is not enough words to describe what this incredibly selfless dedicated, patient, woman has meant to our lives and I only wish they could be another 25! Thank you sweetheart!”
She added, “Thank you for always keeping me laughing, loving and protecting our beautiful family! Our marriage keeps getting better every year! I can’t wait to spend the rest of our lives together!”