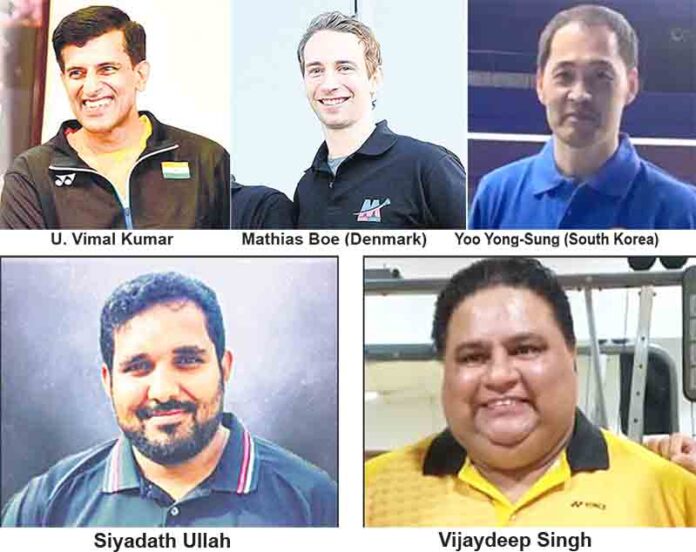 Though the players put in the performance in the field, there is a batch of people that works in the background and makes it possible. A modern-day sports team has a huge support staff that plays a crucial role in its success. Most of the time, they remain in the background — training, mentoring, and encouraging the sportspersons.
The Indian team defeated Indonesia 3-0 in the final with Lakshya Sen, Kidambi Srikanth, and the doubles pair of Satwinsairaj Rankireddy and Chirag Shetty the first three rubbers of the best-of-five matches encounter. HS Prannoy, M.R Arjun, Krishna Prasad Garaga, Dhruv Kapila, Vishnuvardhan Goud Panjala and Priyanshu Rajawat were the other members of the team.
So, as the members of the Thomas Cup-winning Indian men’s badminton team bask in the glory, deservedly so, what also needs to be mentioned is the role played by the coaches in the historic campaign in Bangkok, Thailand, that saw India crowned as the world champions in team badminton.
Though former England champion Pullela Gopichand has been the chief coach of the Indian badminton teams for many years now, Gopi, who runs his academy in Hyderabad and is also a vice-president of the Badminton Association of India (BAI), was not there in Bangkok due to prior commitments. Gopi has trained Kidambi Srikanth. He is the brain behind the planning the course for the Indian players.
Here’s a look at the coaches that were there in Bangkok and played a role in India’s maiden title triumph in Thomas Cup:
U. Vimal Kumar
After an illustrious career as a player, U. Vimal Kumar, who won the national title in 1988 and 89 and was also a member of the India team that won a bronze medal in the 1986 Asian Games in Seoul.
Vimal is co-founder and chief coach of the Prakash Padukone Badminton Academy in Bangalore and a former chief coach of the Indian team. Having trained players like Gopichand, Saina Nehwal in the past, Vimal is currently the personal coach of top singles player Lakshya Sen.
The 59-year-old who traces his roots to Kerala and has vast experience in coaching, was a member of the Indian men’s team that qualified for the Thomas Cup Finals, playing alongside Padukone and Syed Modi. In Bangkok, he was the senior-most coach and oversaw the training of the singles players.
Mathias Boe (Denmark)
A top doubles player of his time, Boe won a silver medal in the 2012 Olympics in London and was a member of the 2016 Thomas Cup-winning Denmark team, Boa had joined the team as coach of the doubles team of Rankireddy-Shetty after his initial contract ended last year after the Tokyo Olympic Games.
A multiple-time winner on the BWF circuit, Boa ended his playing career in April 2020 at the age of 39. It was Boa’s inputs and timely interventions that helped Rankireddy-Shetty come up with their best performance of recent times in the final against Mohammad Ahsan and Kevin Sanjaya Sukamuljo, saving four match-points in the second game.
Yoo Yong-Sung (South Korea)
Yoo is a former South Korean player who won the Olympic silver medals in men’s doubles with Lee Dong-soo in the 2000 and 2004 Games. He is currently the chief coach at the Prakash Padukone Badminton Academy in Bangalore where he also coaches Lakshya Sen.
The 47-year-old from Dangjin, neat Chungcheongnam-do in South Korea, is one of the most successful doubles players in South Korea and has vast experience of playing at the international circuit, having won a silver and two bronze medals in the World Championships, a gold in Asian Games 2002 at Busan, and silver in 1998 Games in Bangkok. He took to coaching after a successful career and has done stints in his native South Korea before joining PPBA.
Siyadath Ullah
A long-time associate of Pullela Gopichand, Siyadath is coaching the Indian singles players after Indonesian Agus Dwi Santosa late last year. A budding badminton player from Mahbubnagar district in Telangana, Siyadath’s career as a player ended prematurely at the age of 19 due to a shoulder injury.
That prompted the 37-year-old to take up coaching and he joined Gopoichand in 2004 and has been there with him since then. As a senior coach with Gopichand’s academy, Siyadath has played a key role in the development of Saina Nehwal, P.V Sindhu, Kidambi Srikanth, B Sai Praneeth, H.S Prannoy, Gurusaidutt, Parupally Kashyap and Tarun Kona and other protegees of Gopichand’s academy.
Vijaydeep Singh
Another former doubles player, Vijaydeep has won the national championship multiple times and has been part of many Thomas Cup campaigns as a player. Now a reputed coach at the domestic level, Vijaydeep is very affable and known for his strong, wristy defense. The 49-year-old from Patiala took to coaching after his father Pitamber Singh was the chief national badminton coach at the National Institute of Sport in Patiala.
Vijaydeep was one of the first Indian players to concentrate on doubles and was hugely successful despite weighing 90-plus kgs during his peak fitness. He has been working with Indian doubles players for the last many years.