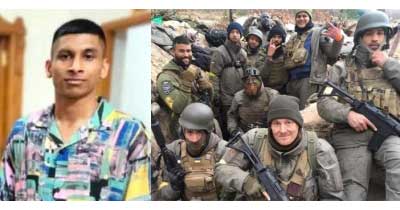 The Coimbatore youth, Sainikesh who joined the paramilitary force in war-torn Ukraine is not keen to return home and his father is not insisting on his return.

Ravichandran, father of Sainikesh while speaking to IANS said, “After the Russian attack on July 25, I had contacted him. He is not that keen to return home and I also did not pester him.”

The father said that Sainikesh had completed his Aerospace Engineering course in Ukraine and that he had asked him to return home but the boy was not keen and hence he decided not to pester him for the return.

It may be noted that Sainikesh had joined the Georgian National Legion, which is a paramilitary unit for volunteers under the Ukrainian forces. The Coimbatore youth had joined the unit in February 2022 and continued with it even as the Government of India airlifted more than 15,000 students from Ukraine after the war commenced.

The Indian government stopped evacuation from Ukraine since mid-March and flight services were cancelled from Ukraine.

Sainikesh, it may be recalled, had tried to join the Indian Army after his Plus two and later had approached the US Consulate in Chennai for joining the United States Armed forces. As he could not make it to either of the two, he joined an aerospace engineering course in Ukraine. When the war broke out in Ukraine, he joined the paramilitary force and did not return home even after repeated requests from his family.

The central intelligence agencies had visited his home and found his room full of posters of the Indian Army.

Colony members protest against merger with another colony at Aghunato