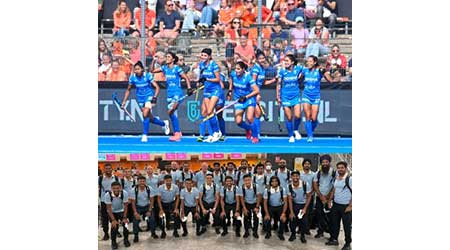 The most successful nation at the Olympic Games, India, has never come back home with gold from the Commonwealth Games men’s hockey competition. It reached the final twice — in 2010 and 2014 — but lost to Australia on both occasions.

As the clock ticks down for the start of the 22nd edition of the Commonwealth Games in Birmingham on July 28, the India men’s hockey team embarks on another campaign with a lot to prove.

Top-most on India’s agenda will be to win their maiden gold and prove that the team has the ability to emerge victorious in a tough field.

Though the Commonwealth Games started in 1930 as the British Empire Games at Hamilton in Canada, hockey is a recent entrant, having made its debut in 1998, Kuala Lumpur. Australia have dominated and triumphed in all editions.

By winning gold in Birmingham, the Indian hockey team will also prove that its recent success is no flash in the pan. Coach Graham Reid’s India scripted history in Tokyo 2020 last year by winning bronze, its first medal at the Olympics in four decades and has recently finished third in the FIH Pro League. In recent times, the India men’s hockey team has also attained its best position in FIH World Rankings.

One of the reasons why the India men’s hockey team has faltered in the Commonwealth Games is the close proximity to the FIH World Cup and the Asian Games, which are invariably held in the same year.

With the Asian Games being the qualifying event for the subsequent Olympic Games, the India teams concentrated on the World Cup and the continental competition.

However, this time around the team does not face these hurdles as the Hangzhou Asian Games have been postponed to next year while the World Cup will be held in Odisha in January 2023.

The postponement of the Asian Games means Hockey India had to change its earlier stand of sending a second-string team to Birmingham and instead field a full-strength squad.

At CWG 2022, the India men’s team is placed in Group B with England, Canada, Wales and Ghana as the other contestants. Group A comprises defending champions Australia, New Zealand, South Africa, Pakistan and Scotland. With England as the only strong opponent, India stand a good chance of topping the Group and avoiding Australia in the semifinals.

In 2018, the team coached by Sjoerd Marijne had finished fourth, losing 1-2 to England in the third-place match. Birmingham presents the team with a great chance of bagging a medal. Whether it will be gold, only time will tell.

But coach Reid said he is not thinking about anything but India’s opening match against Ghana on July 31.

“Ghana is first up and we don’t know too much about them — which is always dangerous in my mind if you don’t have too much information about how a team plays, then you better make sure that you are playing at your best.

“Then we have England and they are an incredibly difficult team. They are fast, they are experienced and they never give up. Then we move to Canada, which has great experience in the Olympics and Commonwealth Games, and they are always there to fight.

“We don’t know much about Wales but they do come from Great Britain and they have very similar playing styles and very similar mentality and they are always difficult and fight till the end, they play a very physical and demanding game,” Reid told IANS in an interview.

For the women’s team, the real battle will start in the semis.

Compared to their male counterparts, the India women’s hockey team won gold in the 2002 Games in Manchester, beating England 3-2 in extra time. The India women’s team had reached the final in 2006 in Melbourne but lost by a solitary goal to Australia. In 2018 in Gold Coast, the Indian women’s team suffered a humiliating 0-6 defeat against England.

Though reaching the semis may not prove that much of a problem, the real battle will start after that as India will either run into Australia or New Zealand.

The India women’s team had caught the attention with a brilliant performance in Tokyo 2020, unexpectedly making it to the semifinals and finishing fourth eventually.

Though the team has done well after that by finishing third in the FIH Pro League, the side had a disastrous campaign in the FIH Women’s World Cup in Netherlands and Spain, finishing ninth.

The team had reached England earlier, straight from the World Cup, and is getting acclimatised to the conditions, which are expected to be hot as England is experiencing the hottest summer in a decade.

Schopman’s team had failed to play up to its potential in the World Cup, failing to give finishing touches to aggressive attacks and many penalty corners it had earned. The team had allowed easy turnovers as it lost crucial matches to New Zealand and Spain.

The loss against New Zealand pushed the team into the crossover matches in which it lost to Spain and failed to make it to the quarterfinals.

“We have learnt from the mistakes we made in the World Cup. We will be working on these areas, will look at the videos of those matches and will do our best to improve our performance,” said senior player Nikki Pradhan in a virtual press conference organised by Hockey India a few days back.

The team is the same that participated in the World Cup except for goalkeeper Bichu Devi, who makes way for the more experienced Rajani.

The India team, captained by Savita, begins its campaign on July 29 against Ghana, before playing Wales on July 30, England on August 2 and Canada on August 3 in the preliminary round.