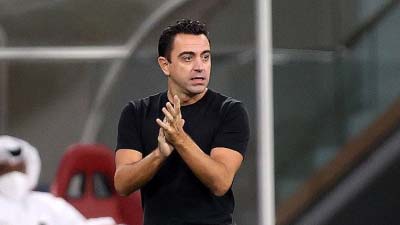 The fourth round of matches in La Liga kicks off the day after the summer transfer window closes and marks the start of an intense fortnight with four games for teams playing in Europe.

The weekend gets under way in Vigo on Friday night as Celta take on Cadiz, who are rock bottom of the table with three defeats in three games and without a goal following their 4-0 defeat at home to Athletic Bilbao on Monday.

The teams in Champions League action all play on Saturday, with Sevilla’s home game against FC Barcelona one of three fascinating matches.

Barca travel after morale-boosting wins against Real Sociedad and Real Valladolid, while Sevilla have just one point from their first three games of the campaign, and pressure is starting to mount on coach Julen Lopetegui.

While Xavi Hernandez isn’t likely to make many changes to the side that won 4-0 against Valladolid, the game probably comes too early for Lopetegui to hand starts to new arrivals Adnan Januzaj and Kasper Dolberg, who should boost what has so far been a lackluster attack.

Real Madrid play their first game in the renovated Santiago Bernabeu Stadium against joint leaders Real Betis, and something has to give in a game between two sides with 100 percent starts to the season, reports Xinhua.

Carlo Ancelotti could bring Dani Carvajal and Ferland Mendy back into the side, while Betis will continue to look for goals from in-form striker Borja Iglesias, against a rival who have a habit of seeming not to play well before winning games with moments of brilliance.

Saturday also sees Real Sociedad at home to Atletico Madrid, and the Basques could have new arrivals Alexander Sorloth and Umar Sadiq in their starting 11.

Atletico got lucky with a deflected goal to win in Valencia on Monday and this will be another big test for Diego Simeone’s slightly irregular team.

Sunday kicks off with Osasuna entertaining Rayo Vallecano in a game between rivals that both suffered their first defeats of the campaign last weekend, although Osasuna have won their two home matches, while Rayo are unbeaten away.

Athletic Bilbao have had a positive start to the season with two wins and a draw since Ernesto Valverde’s return to the dugout, and the big doubt ahead of their home game against Espanyol is whether striker Inaki Williams can shake off an ankle injury to continue his record of 236 consecutive league appearances.

Ander Herrera could also make his return for Athletic, eight years after leaving the club to join Manchester United.

Villarreal also have two wins and a draw and should build on their start at home to an Elche side that has just one point from three games. Villarreal coach Unai Emery has problems at right-back after Juan Foyth suffered an injury, and there are doubts over Samuel Chukwueze, who could move to Everton.

Valencia face Getafe in a key game for Gennaro Gattuso after defeats against Athletic Bilbao and Atletico, but the Valencia coach’s planning is not helped by the departure of Uros Racic and likely moves for Maxi Gomez and star midfielder Carlos Soler, who is set to join Paris Saint-Germain.

The round of games ends on Monday as recently promoted Real Valladolid and Almeria go head to head.