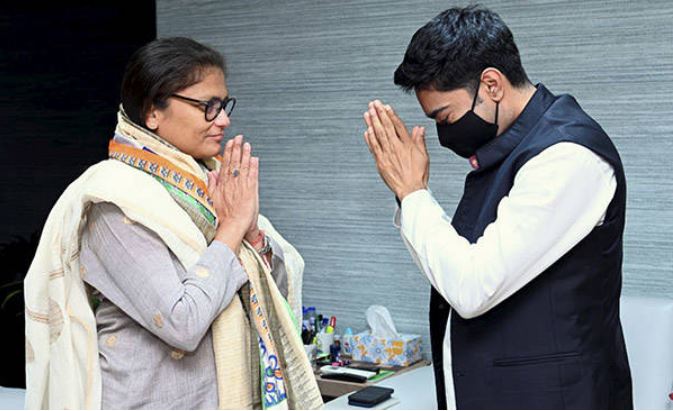 Guwahati, Aug 16 (Agencies): All India Mahila Congress president and former MP from Silchar Sushmita Dev resigned from the Congress Sunday, and joined Trinamool Congress (TMC) in presence of TMC national general secretary Abhishek Banerjee.
Inducting Dev into the party, TMC tweeted, “We warmly welcome the former President of All India Mahila Congress Sushmita Dev to our Trinamool family!”
According to The Indian Express, the resignation of Dev — who is the daughter of seven-time parliamentarian Santosh Mohan Dev and considered the face of the Congress in Assam’s largely Bengali-speaking Barak Valley — comes as a big blow to the Congress. In the recently-concluded Assam Assembly elections in May, the Congress— which had partnered with Badruddin Ajmal’s All India United Democratic Front (AIDUF) — was defeated by the NDA alliance. Since then, at least two prominent Congress legislators (Rupjyoti Kurmi and Sushanta Borgohain) have jumped ship to the BJP.
In a letter to Congress chief Sonia Gandhi, Dev did not mention why she was resigning but said that she cherished her “three-decade-long association” with the party. “May I take this opportunity to thank the party, all its leaders, members, and workers who have been a part of my memorable journey,” Dev wrote in the letter, expressing gratitude to Sonia Gandhi for her “guidance.”Following Dev’s resignation, senior Congress leader Kapil Sibal tweeted: “Sushmita Dev Resigns from primary membership of our Party. While young leaders leave we ‘oldies’ are blamed for our efforts to strengthen it The Party moves on with: Eyes Wide Shut.” Congress leader of the Opposition in Assam, Debabrata Saikia confirmed to The Indian Express that Dev had sent a letter to Sonia Gandhi on Friday night. On Saturday afternoon, the Congress high command — including Sonia Gandhi and Rahul Gandhi — had a meeting with the delegations of the Assam Pradesh Congress Committee in Delhi. “She was very much a part of the meeting…we were not aware she was going to quit,” said Saikia.
However, rumours of Dev’s quitting surfaced in February, when she is said to have walked out of a party meeting in Guwahati unhappy over selection of candidates and seat-sharing with AIUDF in the three Barak Valley districts in south Assam. Later in an interview, she told The Indian Express that she “never wanted to resign” but was “hurt”. “When we had a one-on-one conversation before the elections, she was mentioning that she did not prefer the Congress alliance with AIUDF. However, she worked for the party after that…I do not know what happened recently but the old reason was that she was against the AIUDF alliance,” Saikia said.
Sources said that she was “disgruntled” with the party because she felt that her “political space was continuously being shrunk”. “Her Lok Sabha seat (Silchar) has about seven assembly segments… there were talks that that half of them would be given to the AIUDF or and some to Muslim candidates in the Congress in the Assembly elections. She felt that it would decimate the Congress in Barak Valley, alienate the Hindu voters further, and hurt her chances in 2024 elections as well,” a source close to her said.
“She felt she was not taken seriously and neither was she consulted for key decisions.Even when it came to the Citizenship Amendment Act (CAA), her position as a Bengali Hindu (the community largely supports the CAA in Assam) came in conflict with her party’s official stand on the Act,” the source said.
Saikia said that he heard that Dev was in talks with the TMC. The source added that she may “play a “national” role in the TMC — especially with the TMC trying to make ‘serious’ inroads into Tripura.”
Dev’s father, Santosh Mohan Dev is still a big name in Tripura, and in his seven terms as an MP, he had represented Silchar from Assam five times and Tripura twice.