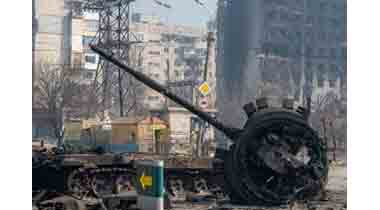 The year was 2006 or 2007, I was lecturing at the JNU in Delhi. The topic was Russia’s foreign policy, and Russo-Ukrainian verbal bickering of that era was constantly cropping up as a discussion point.

That’s when I’ve discovered that my audience just could not warm up to the subject, because you had to know a lot of foreign history to understand what was is about. And, anyway, why should professors and students of JNU be in the know about a very obscure ethno-ideological conflict somewhere in Europe? I could not blame them for taking no interest. I had to blame myself for not putting it clearly.

So I simply said: look, folks, Ukraine is Russia’s Pakistan. And that’s when everybody woke up and began to take interest and ask questions.

Today, Ukraine is still Russia’s Pakistan. Only thing, it’s a Pakistan of the year 1971, when a war over Bengal had started, dragging several foreign powers into the fray. Similarities here are often close to 100 per cent.

We need history to avoid past mistakes and, maybe, to draw inspiration from the past solutions. It’s a pity that next to nobody in Russia remembers the lessons of 1971, since you have to be an Orientalist for that, or to be over 70 and remember the old newspapers. For us, that war was too far away, and too long ago.

We had newspapers at the time, we had TV, but we did not yet live in a world where fake news were morphing into huge global phantoms, bearing no resemblance to the truth. While today you are supposed to believe that we are seeing a war started by a huge imperialistic Russia, suddenly invading a small freedom-loving Ukraine.

The West was sure, this time, that it was in complete control of all the media sphere, globally. But something went wrong. “The global battle of narratives is in full swing and, for now, we are not winning,” said, last week, the EU foreign policy chief Josep Borrell.

Of course they are not winning. How about a “narrative” about an imperialistic India attacking a small, freedom-loving Pakistan in December 1971? Did that narrative win?

Let’s go back to these 100 per cent similarities of these two wars. Pakistan in 1971 had its East and West, and they were, mildly speaking, uncomfortable with each other. The true Pakistanis were supposed to speak Urdu, not Bengali. The Easterners were treated like second-rate Pakistanis.

Ukraine has its East and West, too. The industrial and Russian-speaking East (and South) had been arbitrary attached to Ukraine by the Communist government starting from 1918. Ukraine has been struggling with that problem from 1991, getting its independence and statehood after the split of the Soviet Union.

The problem was in Western ideology, based on the idea that “Ukraine is not Russia”, while half of the nation was, essentially, Russian. At first we laughed at it all. I remember a hilarious thriller published in the late 1990-s in Moscow, ridiculing the rag-tag bands of Ukrainian nationalists creating myths about ancient Ukrainian civilization, spreading hatred to Moscovites and mastering weapons, just in case.

Ideology of rejection of your former nation, Pakistani-style, was still only an ideology. Things have changed in early 2014, when a bloody coup happened in Kiev, and the extreme Westerners grabbed power, to the total and open delight of Europe and the US. And, no, they did not attack Russia at the time, they attacked their own hated East, where the “second-rate Ukrainians” lived.

Battalions marched, buildings burned. The Easterners began to form armies of their own and fight. One of the Eastern regions, Crimea, opted for going back to Russia, and confirmed it at a referendum. Other parts of the East just fought, eventually stopping the Westerners.

Let’s remember how the big war of 1971 began — wasn’t there a massive raid of Western troops into what is Bangladesh now, on March 25, with mass murders and arrests and that kind of things, on a huge scale?

The difference between 1971 and the current Ukrainian crisis is, that the war and the split of Pakistan happened within one year. The civil war in Ukraine lasted for eight years, dragging on since 2014. The Ukrainian army had half-surrounded the rebellious Eastern territories, shelling their residential quarters, dams and power stations day after day. And nobody cared but Russia, accommodating more and more refugees from the East. The global “narrative” was holding.

Finally, in early 2022, the huge Ukrainian armies, aided by the Western instructors, began to mass on the borders of the rebellious Eastern territories, and daily artillery strikes on the cities increased sometimes hundredfold. That’s when Russia decided to strike. India was much faster in a similar situation in 1971.

It’s funny how history is repeating itself. America and the West supported West Pakistan back then, in 1971. Russia, together with India, supported the East, which is Bangladesh now, containing the American battleships in the area and delivering weapons to Dhaka.

But then there is a difference. East Pakistan has decided to become a new nation, Bangladesh. It’s absolutely unclear what will happen to the East and South of Ukraine.

You do not expect them to remain a part of Ukraine. Not after these 8 years of war, and not after total obliteration of the Eastern villages and parts of the cities by the retreating Ukrainian troops, ravaging the territories that were supposed to be theirs.

But will the Easterners decide to form their own nation? You have to ask them about that, and such decisions are hard to make, while the war still rages on. There are two self-proclaimed independent Eastern republics out there, existing since 2014. But then, there are more territories to the west of them, on the coast of the Black Sea, which were under Western control only a couple of months ago. And the people there are forming lines to get Russian passports, in spite of the mentioned “narrative” about the imperialist invaders grabbing the freedom-loving Ukraine.

(Dmitry Kosyrev is a columnist for the Russian State agency website ria.ru, as well is for other publications)