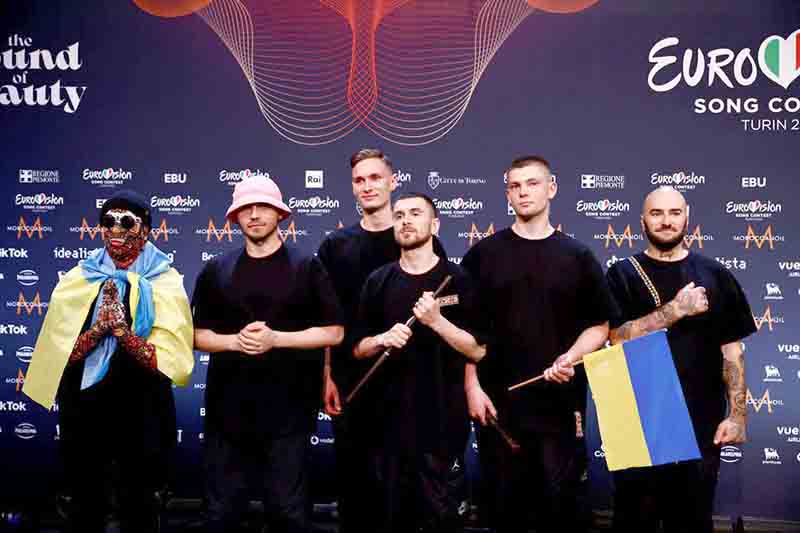 Ukraine’s Kalush Orchestra returned to their homeland on Monday after an emotional Eurovision Song Contest victory, greeted at the border with Poland by servicemen and women whose cause the band had championed in Turin. Frontman Oleh Psiuk was presented with a bouquet of yellow and blue flowers – the colours of Ukraine’s flag – and reunited with his girlfriend before he and his band launched into an impromptu version of “Stefania”, their winning song. On Saturday, they had ridden a wave of popular support to win the annual songfest in the northern Italian city, giving their compatriots a much-needed morale boost after almost 12 weeks of war.
Ukrainian troops watching on television had hailed the win, with Psiuk making a plea for help at the end of the live performance for the besieged city of Mariupol and its Azovstal steelworks.
Bookmakers had made Kalush Orchestra clear favourites among the 40 competitors in the annual contest, which normally draws a television audience of close to 200 million, in part due to widespread sympathy for Ukraine following Russia’s invasion in February.
(Reuters)
“Stefania” – a tribute sung in Ukrainian to Psiuk’s mother that fuses rap with traditional folk music – was lying fourth after national juries voted, but stormed into top spot thanks to a record score during the second stage of voting by viewers.