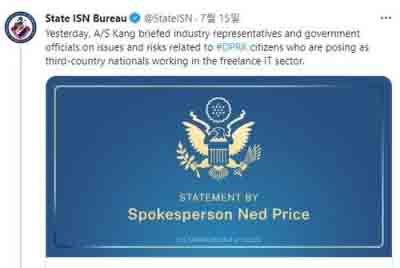 A senior US official has briefed industry and government officials on risks associated with the hiring of North Koreans who pose as third-country citizens working in the information and technology (IT) sector, according to a State Department bureau.

The warning came as Seoul and Washington have been stepping up security coordination to rein in Pyongyang’s provocative acts amid concerns the recalcitrant regime could further escalate tensions by conducting a nuclear test, Yonhap news agency reported.

“They often target wealthier nations where pay is the highest, all while deceptively hiding their true nationality,” it added.

The bureau reiterated Washington’s continued pursuit of dialogue with Pyongyang but underscored its commitment to disrupting the North’s “illicit revenue-generating activities around the world.”

Did my best as RS chairman, am leaving satisfied: Naidu