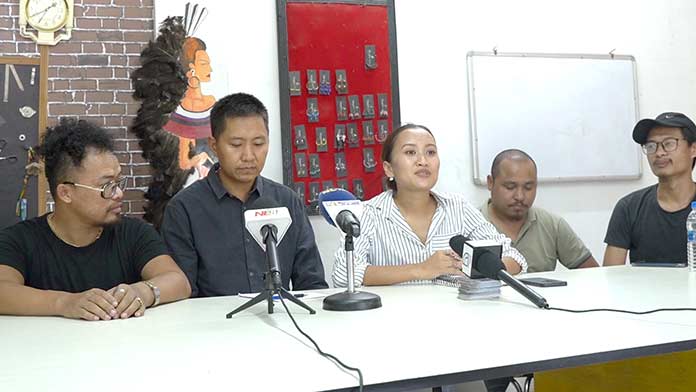 Addressing the need for a platform for budding creative designers, V Movi Institute of Fashion Designing, Cutting and Tailoring has announced that it would be presenting a fashion week under the theme “Carry your story of eco fashion” in the month of October. This was announced in a press conference held on Saturday, at the institute.
Institute managing director, Jacob Krocha said that fashion has been one of the foremost things among Nagas. The institute, like many designing and tailoring avenues in the state having produced hundreds of graduates decided to create a platform and display the creative works of the designers.
The show, a first of its kind for the institute, is scheduled to be held on October 21 and 22, 2022 and will be an annual event, he added. Show organisers are looking out for about 20 designers and around 25 models, male and female from NE region. The designers will be displaying 15 collections based on the recycle. Auditions will be held for designers this month. Organisers also planned to approach the government and invite resource persons for the show. When asked about whether fashion industry in Nagaland contributed towards waste pollutant, Krocha lamented that the fashion industry itself had barely any exposure and denied on the statistics of being a contributor.
Designer and proprietor of the institute Vilhousa Movi maintained that Nagaland have been one of the most fashionable state in the NE region and yet faced a lack of opportunities and platform. Hence, keeping all these in mind, the show was planned Movi added.
On the theme, Movi said that the institute focused on recycling waste materials and use it for creativity purpose while also emphasizing on environmental elements. He hoped for the show to impact the society and spread awareness, shed light on recycling and other alternatives, and bring solutions.
For any details and queries one can contact vilhousamovi@gmail.com (8787414884)