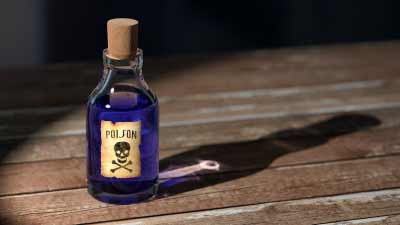 In a miracle of sorts, a woman and her four minor children have survived an attempt made by her husband to poison them.

The husband, Arjun Kashyap, 40, allegedly poisoned his wife and children following a fight between them. Arjun was under the influence of alcohol when he committed the crime.

All the victims were rushed to the hospital where their condition is now stated to be stable.

According to reports, Arjun came home in a drunk state and asked wife Shakuntala to give him money for buying liquor but she refused.

The couple then had a quarrel and Arjun went out of the house and returned minutes later with poison. He mixed it in the diner and forced the family to eat it.

As the wife and children started complaining of vomiting and nausea, the neighbours rushed them to hospital.

The doctors said that the family could be saved only because they were brought to the hospital in time. Arjun, who has been arrested, told the police that he took this extreme step in a fit of rage.

Circle officer Thakurdwara Anoop Singh said, “The case is under investigation and we will take further action only after recording the statement of the wife once she regains consciousness. The condition of all the family members is stable.”

Legislators will resign only after final agreement has been signed: Chingwang