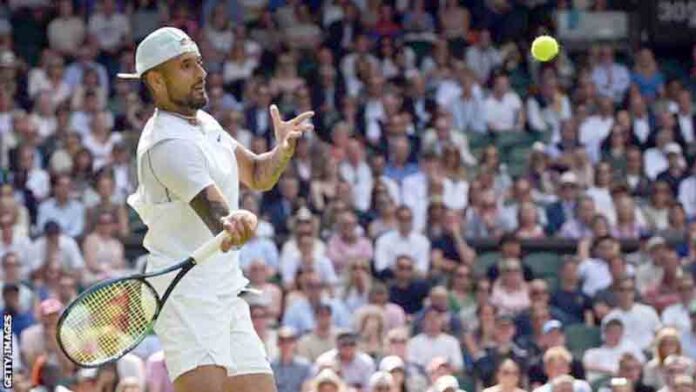 Nick Kyrgios’ entertaining Wimbledon run continued as he shrugged off a shoulder injury to beat American Brandon Nakashima and reach his first major quarter-final in seven years.The Australian was more subdued than in his fiery match against Stefanos Tsitsipas, staying largely quiet in a 4-6 6-4 7-6 (7-2) 3-6 6-2 win.
Victory came despite needing a medical timeout and regular physio treatment. Kyrgios, 27, will play Chile’s Cristian Garin in the last eight on Wednesday. “It wasn’t anywhere near my best performance level-wise but I’m super happy to get through and I fought really hard,” said Kyrgios, who is ranked 40th in the world.
“I’ve played a lot of tennis in the past month and a half and I’m proud of the way I steadied the ship.” Unseeded Garin, 26, prevented an all-Australian encounter by fighting back from two sets down – and saving two match points in the fifth – to beat 19th seed Alex de Minaur.
The world number 43, more of a clay-court specialist, reached his first major quarter-final with a 2-6 5-7 7-6 (7-3) 6-4 7-6 (10-6) victory. Elena Rybakina advanced to the Wimbledon quarterfinals for the first time in her career after a hard-fought 7-5, 6-3 win over Petra Martic of Croatia.
It took Rybakina, the No. 17 seed, one hour and 20 minutes to overcome the world No. 80 Croatian in a match that was tighter than the 7-5, 6-3 scoreline suggested. The 31-year-old Martic recovered from a 0-3 deficit in the first set, claiming four games straight to take a 4-3 lead. But helped by her power hitting, the Kazakhstani recovered to level in the eighth game and secured the 46-minute opener in the 10th game.
She will face either Alize Cornet or Ajla Tomljanovic in the quarterfinals.
The result takes Rybakina one round further than on her 2021 debut when she made the last 16 and puts her into her second career major quarterfinal following Roland Garros 2021. The 23-year-old becomes the second Kazakh to reach the last eight at SW19 following Yaroslava Shvedova, who made that stage in 2016.
Rybakina extended her head-to-head lead against Martic to 2-0, having previously defeated the Croat 7-6(5), 7-6(2) in the 2020 Dubai semifinals.
That victory was part of the 21-4 record with which she started that year, a surge that took Rybakina into the Top 20 just before the Covid shutdown.

After Busan, ‘The Rapist’ bags award for Aparna Sen in Melbourne