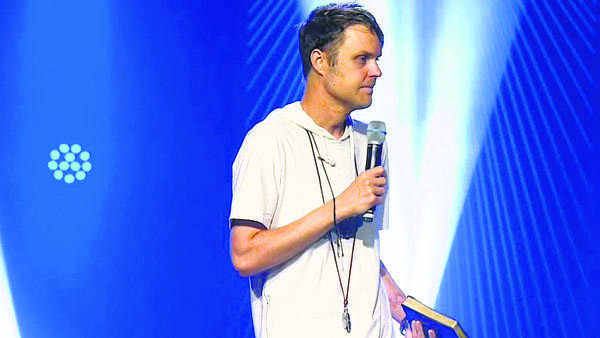 “It was this really exciting moment in my life,” Jason David Sluyter recalls.

“They do a biopsy, and that’s when I find out, two weeks into this new job, this new season of life. You have cancer.  And my first response was…’that’s not my story’.  I have friends, and that’s their story.  I have family members, and that was their story. But that’s…this is not how my story goes,” says Jason.

“My body, like, shuts down.  All the sudden, my hip…it feels like my hip is broken, it’s in so much pain,” Jason recalls.

“The next morning, I’m trying to take a shower. And as I get out of the shower, my body just collapsed to the ground, and I’m shaking on the ground, and I just start screaming.  And my wife Alyson runs over to see what’s wrong, and my body is just convulsing, I don’t know how to explain it.”

Doctors discovered that the Stage 3 cancer in Jason’s tongue was secreting a chemical that was poisoning him from the inside out.  His 13-day hospital stay included a trip to the operating room.

“So, they drill a hole in my hip. Now I’m in a wheelchair, with cancer in my mouth. So then, they do the first surgery, and they open me up from ear to ear, and they begin to remove half of my lymph nodes, and they remove 20% of my tongue, believing that they’ll get all the cancer out,” says Jason.

“It’s over!  Now, now I’m going to come…I’m going to that Promise Land,” Jason recalls saying.  “I’m going to be the pastor God called me to be!”

“All the sudden at the end of June, my tongue… that same thing is on my tongue,” says Jason.  “I remember the doctor, he looks at it, and he says, ‘I don’t know what to tell you, but the cancer came back. It came back more aggressive, it’s spreading quicker, it’s already spread into your neck. It didn’t spread this fast last time. This is borderline Stage 4 cancer. We have to operate.’”

“Now I’m a piano player. He, so he’s like you’re not going to be able to use your arm for a while,” Jason recalls.  “I’m a singer and a speaker, and he says you’re not going to talk the same.  He kept talking, and I literally stopped listening. And I just start crying. I felt so unprofessional, I didn’t feel like an adult, like a man, in that moment, cuz I’m just sitting in the chair, weeping as the doctor’s just telling me what’s going to happen. I’m like I ca- can’t do this.”

“He looked just like he had gotten out of warfare, like he was just all bandaged up and everything, and he looked like he had taken a pretty hard hit,” Alyson recalls.

“I’m feeling like I need to throw up, but I can’t throw up, because my tongue is so… swollen,” says Jason.  “I’m lying in the bathroom. I’m lying on the ground, covered in my own waste, and I’m throwing up. I’ve got mucous pouring out of my neck, blood coming out of my mouth, and I am screaming in pain.”

“All I know is simple math. The pain is too much, the only way to end the pain is to die.  I remember typing it in Google: Easy Ways to Die. Easy ways to die…because I’m tired of the pain. So, if I’m going to kill myself, I don’t want it to hurt,” Jason recalls.

“He was just in a persistent pain,” says Alyson.  “Usually he could say, ‘Hi’ or usually he can smile, but, you know, he couldn’t do any of those things.”

“And all the sudden, in that moment, I just felt like a presence enter that room. And it was like – It’s like if peace was a person, he entered that room in that moment, and I just began to drift off to sleep for the first time in three days. I woke up the next day, and I – I started telling myself – I’m not going to give up,” says Jason.

It was Easter Sunday.  Jason’s pastor came to the house beforehand and asked if he was well enough to stand before the church congregation.

Jason recalls “As soon as I walked onto the stage, and Pastor Jeff hadn’t warned them that I was coming. I remember the whole place stood to their feet, and I felt what it felt like to be a part of a family who will walk with you through any journey in life. A family that will love you, even when you’ve done nothing for them.”

“After many painful surgeries, the cancer came back, I had to do more surgeries, chemotherapy, and radiation. They said you might not sing again. You might not even speak again.  But I’m here today, I’m standing, I’m walking, I’m jumping. And now I get to sing, and speak, about the goodness of God,” says Jason.

“All of the sudden, we have people from Korea who fly to California to visit our church to see what is this, what is happening here,” Jason recalls.  “All the sudden, I’ve got people in Sweden, and Australia, and the UK who are messaging us and saying, ‘Hey, I have tongue cancer too.’  Other people saying, ‘I stopped painting because of my illness. I stopped dancing because of my disease. I stopped singing because the first time I heard myself sing in the shower’.  I broke down crying because of the tongue cancer, but when I saw your story, I decided I want my own comeback story.”

“I don’t like the false narrative that you have to look back at your life and be like, oh it’s okay, because it wasn’t okay. What happened to Jesus was not okay. Him being nailed to a cross, being tortured, was not okay”, says Jason.

“But it’s about Jesus taking the things in your life that are not okay. They represent death, and darkness, and despair, and hopelessness and him saying, ‘Watch the ultimate comeback. I can redeem it, and bring what was dead back to life.’”

“And now I look back, and I see…what a comeback. He did it,” says Jason. “And He gets all the glory. And the only thing I can do is never give up.”