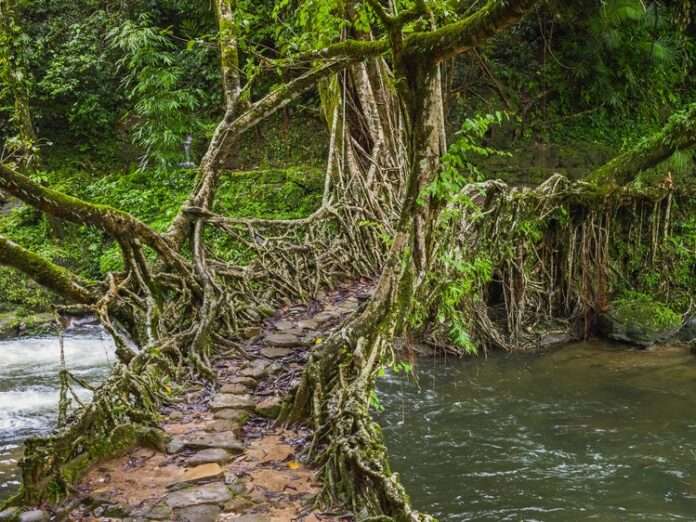 The Zoological Survey of India (ZSI) has asserted that the ‘Living Root Bridges’ in Meghalaya must meet the categories of ‘Faunal Diversity’ and the ‘preparation of health cards’ to attain the tag of United Nations Educational, Scientific & Cultural Organization (UNESCO) World Heritage Site, reports The Sentinel Assam.
The Living Root Bridges is situated inside a remote village in the northeastern state of Meghalaya. It is a breathtaking destination for tourists and it showcases the botanical and socio-cultural links between nature and human culture.
Dr Dhriti Banerjee, the director of ZSI, a premier and reputed zoological organization, has stressed two aspects for fulfilling the IX and X criteria of the UNESCO World Heritage. Sites showcasing significant ongoing ecological & biological processes and development of terrestrial, freshwater, coastal and marine ecosystems and communities of plants and animals are represented by Criteria IX.
On the other hand, sites that contain significant natural habitats for in-situ conservation of biological diversity, including those containing threatened species of outstanding universal value from the point of view of science or conservation is represented by Criteria X.
Meanwhile, Professor K Vijay Raghavan, Principal Scientific Adviser to the Government of India is also in favour of designating this destination as a UNESCO World Heritage Site. He said that Living Root Bridges deserve the UNESCO tag due to its rich micro and macro species associated with this majestic destination. Scientists from the ZSI recently paid a visit to some sites of the ‘Living Root Bridges’ for assessing its faunal diversity.
They documented as many as 83 faunas, which includes six mammals, five aquatic, 72 terrestrials, from the 11 Living Root Bridges. It is worth noting that six species of mammals were reported for the first time from two bridges. “A fruit bat, Macroglossus sobrinus K Anderson, was found with seeds in spit and seemed to be a potential seed disperser, which needs further investigation. Entomofaunal diversity includes eight orders (two aquatics, six terrestrial) within the radius of 200 metres of Living Root Bridges assessed,” the ZSI said in a statement.
The statement added that Nohwet, a living root bridge site, was found to have more diversity of butterflies, dragonflies and aquatic insects than other Living Root Bridges. Furthermore, no infestation of Isoptera (termites) was observed in any of the root bridges and the scientists also spotted spider webs on tree trunks.
The scientists also stated that ‘Living Root Bridges’ houses several critically-endangered species of flora and fauna and is therefore a major reason to be listed as an UNESCO World Heritage site.
The ‘Living Root Bridges’ is locally referred to as ‘Jingkieng Jri’ and is conserved by the communities of Meghalaya through their sacred customary practice of preserving the groves known as ‘Law Kyntang’.
The ‘Living Root Bridges’ are made from rubber tree roots, which is known as Ficus elastica tree and their tangled webs of roots provide a stable alternative to wooden bridges. It is considered to be one of the finest creations of nature. Last but not the least, Meghalaya could witness a significant boost in tourism if this jaw-dropping site gets the UNESCO World Heritage Site tag.